How does Offline Surveys work?

Offline Surveys is very easy to use. You just create your surveys at LimeSurvey and Offline Surveys then converts them into a special structure so they can be used offline.

Does Offline Surveys work with all Android devices?

Offline Surveys is optimized for phones and tablets and will work wit any device running Android OS 21 or later (launched in 2014).
We are also planning to make Offline Surveys available for older Android OS releases.

Which LimeSurvey versions is Offline Surveys compatible with?

Offline Surveys is compatible with LimeSurvey ver:2.0 (released in 2012) or more

Offline Surveys supports nearly all Limesurvey question types. There are only two exceptions:

Will all LimeSurvey surveys work properly when using them at Offline Surveys?

Offline Surveys supports all  LimeSurvey question types and nearly all LimeSurvey features but to port a LimeSurvey survey to OfflineSurveys, certain requirements have to be met. The app will guide you step by step on how to adjust required settings at LimeSurvey.

Yes, it does. All LimeSurvey Expression Manager Features which work properly in LimeSurvey’s “All in One” mode will work fine wen using the survey at Offline Surveys.

Are there any limitations when running a survey offline?

When running a survey offline there are some minor technical limitations. We have created an overview of current Limitations and Workarounds for you.

How do I add a new survey?

We have documented this process for you in detail at the How to add new survey page.

Which settings are required when adding a survey to Offline Surveys?

Offline Surveys will guide you through this process step by step and will tell you how to adjust your survey at LimeSurvey acordingly.

If you prefer to adjust these settings before setting up your survey please check the required survey settings.

How to fix errors showing up when adding a new survey?

There are some known errors when adding a new survey. For all of these issues we have added an error description at the linked website and there we also explain how to fix these.

How to sync responses automatically?

How to add Android multimedia questions

Besides all LimeSurvey question types Offline Surveys also supports various Android multimedia questions (check the screenshots available here). These can be used to enrich your surveys if you run them using Offline Surveys.

We have created some examples and detailed instructions for you to easily add these questions to your LimeSurvey surveys.

How to track interviewer details

When using multiple devices to collect data using Offline Surveys and later syncing all data on a central server, you will not know which interviewer entered a certain data set. To collect this information you can simply add a mandatory short text question at the very beginning of your survey so the interviewer always has to enter his/her details.

If you do not want to show that additional question at the main online survey (which was cached at Offline Surveys) you can set the question to hidden after the survey was cached. Just edit the question at LimeSurvey and at the advanced survey settings set “Always hide this question” to Yes.

Which LimeSurvey user rights are required for Offline Surveys?

If you want to create a new LimeSurvey user to use with the Offline Surveys app you have to make sure that the new user is assigned to your survey(s) and has sufficient rights to:

At the Limesurvey admin interface at least these rights have to be set:

How to share a survey with other OfflineSurveys users

This QR code will include

How can I use the “Previous” button at my surveys?

OfflineSurveys supports having a “Previous” button since version 1.20 (released 2016-08-28). It is a little hidden though. Some background information:

When caching the survey, the all-in-one mode is required, but at that survey mode there actually is no “Previous” button (that wouldn’t make sense). For that reason, we can’t make use of the common previous button (it simply doesn’t exist when caching).

So to go back to a previous page when running a survey with OfflineSurveys, simply press the device back button down left at the very bottom. It should then show you the app’s “Previous” button feature.

How to make adjustments to my survey, without re-uploading the survey?

Here are some facts about OfflineSurveys

Our Recommendation for changing the survey is:

How to run multilingual surveys with OfflineSurveys

While LimeSurvey fully supports multilingual surveys and switching between different languages, there are some technical limitations for running such surveys offline e.g. switching the language at survey runtime means loading the new language texts from the server which is not possible when running a survey offline.

For running a survey with multiple languages you have to add each survey language variation as a stand-alone survey at the OfflineSurveys app. For example survey …/limesurvey/index.php/867775 comes with languages AR, EN and DE and thus needs to be added 3 times:

How to store which version of a survey was used

If you want to know which survey version was used you can do the following:

You can download this sample survey for testing (simply right-click and select “Save as…“).

Why is Offline Surveys not completely free like LimeSurvey?

The FREE version of Offline Surveys offers nearly the same features like the customized PRO version. The only limitation of the FREE version is a max number of responses that can be synced and surveys that can be locked (max = 10). But there is no limit at OfflineSurveys regarding:

Where do I enter my purchased license key for the PRO version?

You can easily turn any FREE version of OfflineSurveys into a PRO version by entering a license key (visit our online shop for purchasing a key) or you can add a new license key to renew your license (Attention: Adding a new key overrides the old one).

Note that our keys are valid for unlimited devices. You have to enter the key only once and all other devices loading surveys from the same domain will automatically receive the same key which unlocks the PRO version at that device.

Where can I find the license expiry date

The current license status and license expiry date are shown at the main dashboard, below the survey title:

You can get a new license at our online license shop.
Instructions on how to enter a new license key can be found at our FAQ: https://www.offlinesurveys.com/ufaqs/enter-purchased-license-key-pro-version

How to prefill my survey using previous response?

When doing surveys on location one often uses questions asking for the interviewer name or the current location. Usually you have to enter these details manually for every new data set every time. Not a lot of fun…
With OfflineSurveys you can save time by pre-filling these details from the previous response. The pre-filling feature is available since version 1.25 and currently supports all Limesurvey question types besides:

Adding the feature to your survey for using it at the OfflineSurveys app is simple, it just takes 2 steps:

How to use a Limesurvey survey online AND offline?

Sometimes you want to run the same survey online (using a web browser) and offline (using OfflineSurveys). The advantage is that all responses will be saved at one single survey and you do not need to merge data from different surveys later. So question is “How can we use the best matching question types which can be different online and offline?” For example a barcode question available at OfflineSurveys only should become a numeric question at the online survey? Another example is the Android camera question. You can’t use that question type when running the survey with your PC’s browser so that question types has to be turned into a file upload question.

The solution to these problems is a JavaScript function called Android.getVersionCode()

Since this may sound a little technical, we have created a demo survey OfflineSurveys or Web browser.lss That sample surveydemonstrated how to detect whether a survey is run online or offline Using OfflineSurveys. It uses the following 3 questions:

How to implement timer in OfflineSurveys 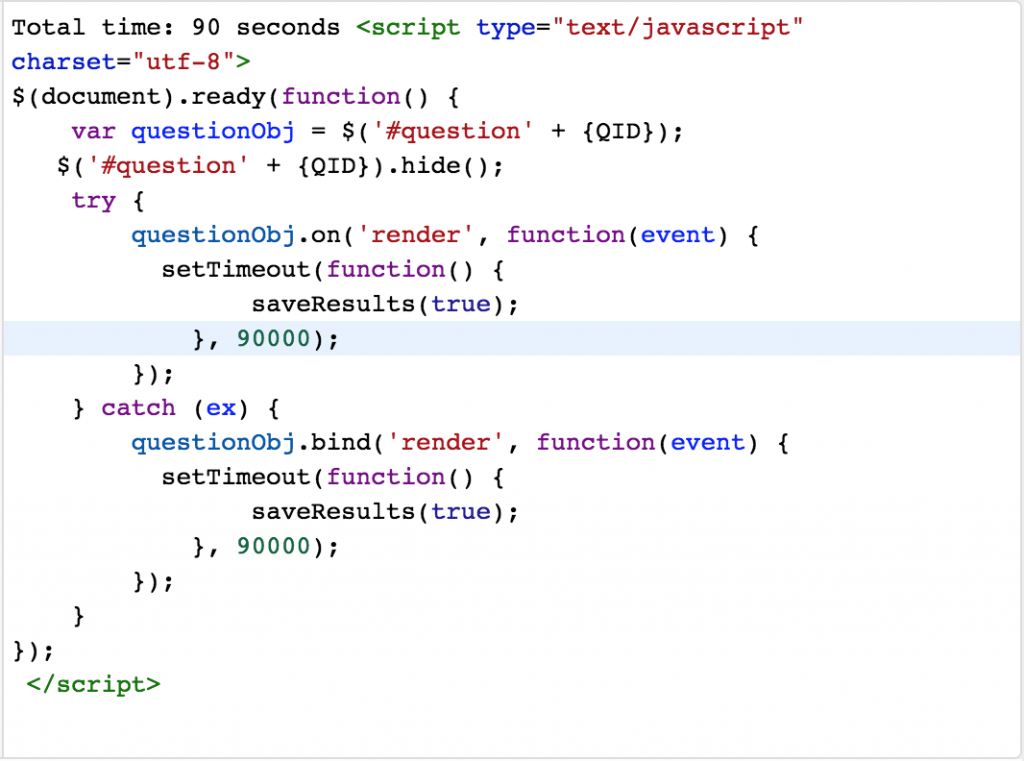 Imprint | Special Thanks to: Icons8.com - IconsMind.com